One issue that people can have with LotFP/OSR games is high character turnover. Sometimes the module is too deadly, the players too green, the GM too evil.

(We burned though 30 characters or so in The Grinding Gear.)


Here is one solution for this, lifted directly from Dungeon Crawl Classics. 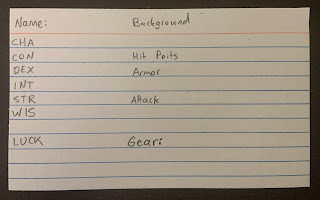 1) Hand the player four index cards and have them write down the six abilities, along with "hit points,” “attack,” “gear,” and "armor." (I also use “Luck.”)

2) They roll 3d6 straight down the line for each ability. (If using Luck, have them average their scores and write this down.)

6) They should generate a starting background. Alternate Occupations is a cheap and great way to do this, especially since there's a table for "human only" characters.

7) Determine damage for their weapons (just find an equivalent weapon from the item list).

8) When making skill checks, they can assume 1 point in the skill if it relates to their profession, otherwise it's 0.

You can use this method...
-to start off a campaign
-after a TPK (to continue in the current adventure)
-if a new player is joining a group in the middle of an adventure
-if a character has died and you want to get the player back in the game as quick as possible
-to give the player four choices of characters, they can then choose one to level up and the others can be retainers

Using the method above, I have players average their ability scores to determine their starting Luck score. This gives them a sense of how good their character is (10.5 is the average).

During play, they can permanently burn a luck point to re-roll any roll they just made. I also use Luck for all sorts of hazard checks - if they want to try something risky, saving throws that don't fall in the other categories, what happens during the night while asleep, etc. They must roll equal to or less than their luck to avoid the hazard.

This means that the more they burn luck to re-roll, the higher the chance they will suffer future hazards.